Picture this: I’m sitting on the bus, with a book in my hand. They released us from school early because of tornado threats and strong winds. I have loud music playing in my ears to block out all the kids on the bus who talk about who knows what. I’m now in tears because I just finished The Lucky One by: Nicholas Sparks. And I don’t know a better day to do this since it is my one year anniversary on WordPress!

About Nicholas Sparks: Nicholas Charles Sparks is an American writer and novelist. He has published eighteen novels and two non-fiction books. Several of his novels have become international bestsellers, and ten of his romantic-drama novels have been adapted to film with multimillion-dollar box office grosses.

I got heavily into Nicholas Sparks in December of 2014 when I got The Best of Me for Christmas. I saw the trailer for the movie and I wanted to read the book so bad. The trailer made me cry so much and I think the thing that drew me in the most was the fact that the trailer involved John Legend’s All of Me, which was my song at the time. I kept saying I was going to buy it but I had so many other books I wanted to buy that I bought so I never got the chance. When I finally got to read The Best of Me, I loved it. I cried so much in the book, and the movie. I never saw one of his movies either and I fell in love with Nicholas Sparks. He also earns brownie points from involving all of his books in North Carolina, were me, my books, and laptop live. 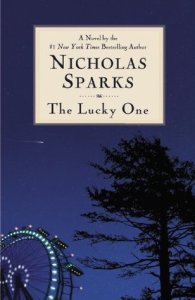 When U.S. Marine Logan Thibault finds a photograph of a smiling young woman half-buried in the dirt during his third tour of duty in Iraq, his first instinct is to toss it aside. Instead, he brings it back to the base for someone to claim, but when no one does, he finds himself always carrying the photo in his pocket. Soon Thibault experiences a sudden streak of luck—winning poker games and even surviving deadly combat that kills two of his closest buddies. Only his best friend, Victor, seems to have an explanation for his good fortune: the photograph—his lucky charm. Back home in Colorado, Thibault can’t seem to get the photo—and the woman in it—out of his mind. Believing that she somehow holds the key to his destiny, he sets out on a journey across the country to find her, never expecting the strong but vulnerable woman he encounters in Hampton, North Carolina—Elizabeth, a divorced mother with a young son—to be the girl he’s been waiting his whole life to meet. Caught off guard by the attraction he feels, Thibault keeps the story of the photo, and his luck, a secret. As he and Elizabeth embark upon a passionate and all-consuming love affair, the secret he is keeping will soon threaten to tear them apart—destroying not only their love, but also their lives. Filled with tender romance and terrific suspense, The Lucky One is Nicholas Sparks at his best—an unforgettable story about the surprising paths our lives often take and the power of fate to guide us to true and everlasting love.

~If you haven’t read the book, I’m warning you of spoilers!

I didn’t go into this book with a lot of knowledge. I knew what the back of the book stated, what people told me (which was a lot because most of the people have seen the movie) and I knew there was a movie. I didn’t want to know too much. I never like to know a lot when I start a book because I want to be surprised with facts, even if it is just the location of the book.

When I first met Ben, I fell in love with him. Something about how easy going and care free he is made me love him. If I had to have a little brother, or even an older brother, I would love to have Ben as mine. Ben to me kind of represents to me that life does bring you hardship but you can always find a way out of it. When Clayton (I never called him Keith in any conversations) brought over Ben with all those bruises on his face, all I could say was child abuse over and over again. Even though it wasn’t child abuse, part of me still believe that it is child abuse. I hated that Ben had to see the death of his father. I hated the fact that Ben could have died in the whole thing as well. If Ben would have died, I would not know what to do with myself. I would have been an awful mess on the bus.

Logan and Beth were my favorite in the book. Clayton and Beth made no sense. Beth, explaining that she was the stupid girl who fell for the first one she could get to made some sense but you don’t have to marry the person you get pregnant to. I love the fact that Logan stood up for Beth when Clayton came over for the first, I feel in love with him. I already loved Logan as it was but he was just amazing.

The one part that I hated about the book was the fact that Beth never gave him the chance to explain how he got the picture. Beth went on and about how he took the picture from Drake and I was sitting there, yelling at her to give him a chance. He didn’t take it from him, he found it.

I would have loved to know more about Drake. Drake seems like a character I would have fallen in love with. The story Beth told Logan about how she was so close to Drake as a kid because their parents died at a young age. That she was worried about hiring Logan because he was in the marines, like Drake. The worst part was when she said that she had so much guilt that she never sent him another picture when he asked for it before he died. Reading this story in the book killed me.

After I finished the book, I got home and I already had the movie on the DVR to watch. I mean the movie was good but it was so different than the book. I enjoy the fact that they added the main parts but I was disappointed that they changed the way Nana was at church. I was so looking forward for Nana singing at the church but they added the scene of Logan and Ben playing at church. I also hated that they didn’t add the scene where Ben and Logan are outside, making the kite. I was so looking forward to seeing them do that so much.

Overall, I would have to give  the book a 4.5 out of 5 stars and the movie a 3 out of 5. It wasn’t my favorite Nicholas Sparks book but it was still amazing and I loved it. And before you ask, my favorite is The Last Song. If you have read the book, let me know what you though about it in the comments!

Stay Safe and Sound with your Books,